XAU/USD bulls denied at first attempts, US dollar not going down without a fight - Financial Daily News Site Skip to content

At $1,822, the price of gold has taken a step backwards despite a soft dollar bias in the markets. XAU/USD is down some 0.8% and has fallen from a high of $1,846.12 to a low of $1,822.60 so far. The US dollar bulls put in a potentially last-ditch effort to defend against a full-on break out to the downside in the latter part of the day on wall Street, but they are not out of the woods yet and are climbing walls within the bear’s cage looking for a way out.

The dollar index (DXY), which measures the currency against six key rivals, slipped to 104.06 in the final hours of the day which took the price close to a critical level on the hourly chart, as illustrated below. However, the bulls managed to see that the dollar moved into positive territory, by some 0.2% at the time of writing around the close of the US forex session.

This is due to the concerns that the Fed’s commitment to quelling red-hot inflation will spur a recession that has sent the 10-year Treasury yields sliding to an almost two-week low.

“Powell’s semi-annual testimony has taken some steam out of the USD, his comments regarding elevated recession risk evidently weighing more than his unconditional commitment to restore price stability,” Westpac analysts recently said.

“But with 75bp still on the table for July and Fed Funds set to rise above 3% by year’s end, USD interest rate support should ultimately continue to build.”

The analysts at Westpac have observed the risks and forecast that the DXY will drop to as far as the 102 level in the near term.

Meanwhile, analysts at TD Securities argued that ”gold prices are overvalued relative to real rates, but the market has been hard-pressed to find a catalyst for a repricing.”

”Market pricing for Fed hikes has soared in recent months, leading real rates substantially higher amid an aggressive quantitative tightening program, without a commensurate meltdown in gold prices. Gold’s outperformance is partially attributable to the massive amount of potentially complacent speculative length from proprietary traders in the yellow metal.”

On the second and last day of his testimony, Powell reiterated the Fed’s commitment to bringing inflation under control. He said on Wednesday that a recession was “certainly a possibility” and that nothing was off the table in response to a question about the odds of a 100-basis-point hike.

The June flash reading of manufacturing conditions from S&P Global fell to 52.4 in June from 57 in May, compared with 56 expected in a survey compiled by Bloomberg. After falling 8.6% in February, 3.0% in March and 2.6% in April, existing-home sales dropped another 3.4% in the US in May to 5,410K (seasonally adjusted and annualized), bringing the total drawback over four months to 16.6%. This was also the lowest level of sales observed in nearly two years. 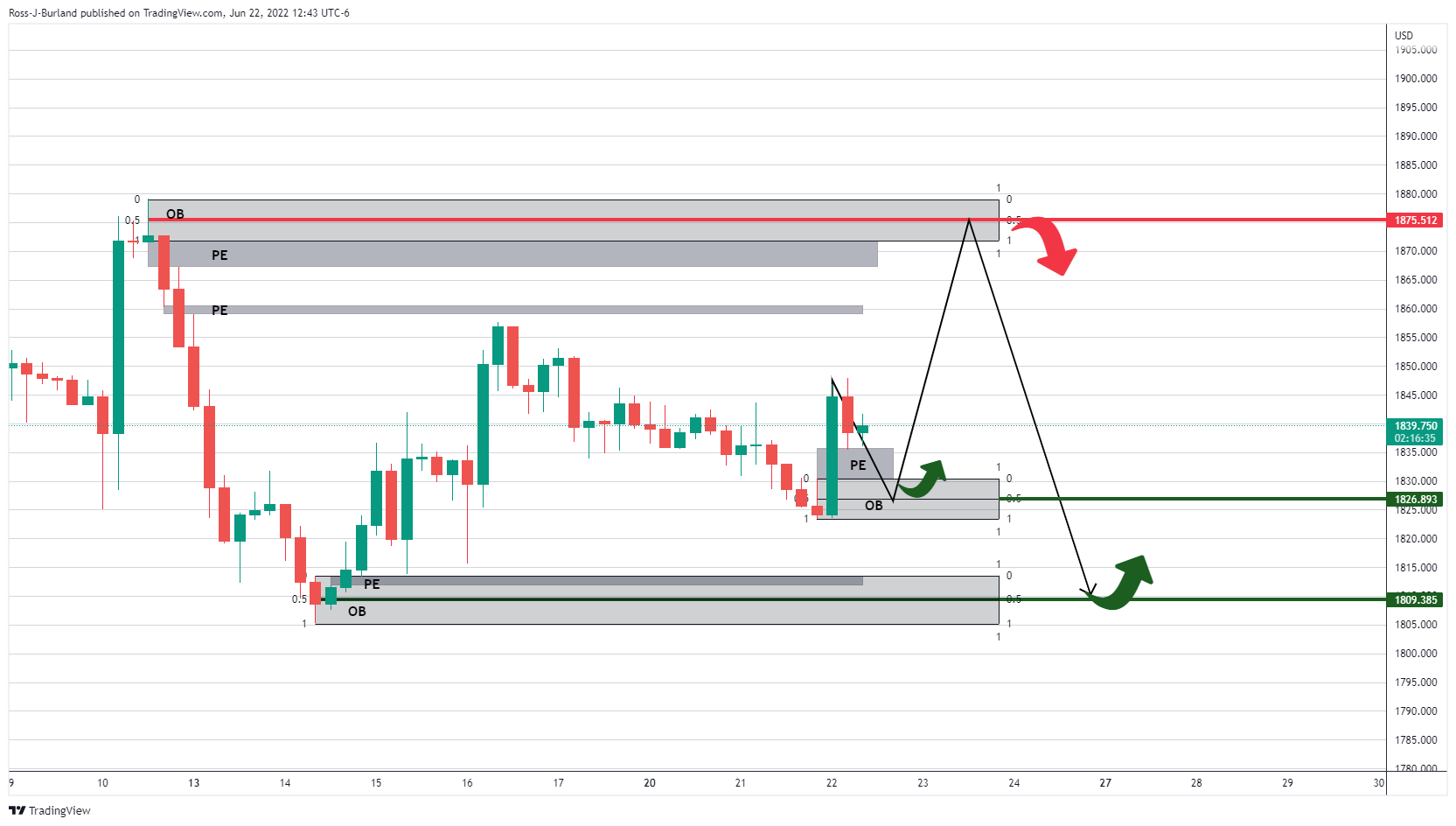 In the prior day’s analysis, the price of gold was anticipated to move lower in order into the $1,820s, albeit not quite as far as it has done so. Nevertheless, the break of structure is a compelling feature of the 4-hour time frame that gives rise to the prospects of a deeper advance towards $1,810 if the bulls throw in the towel: 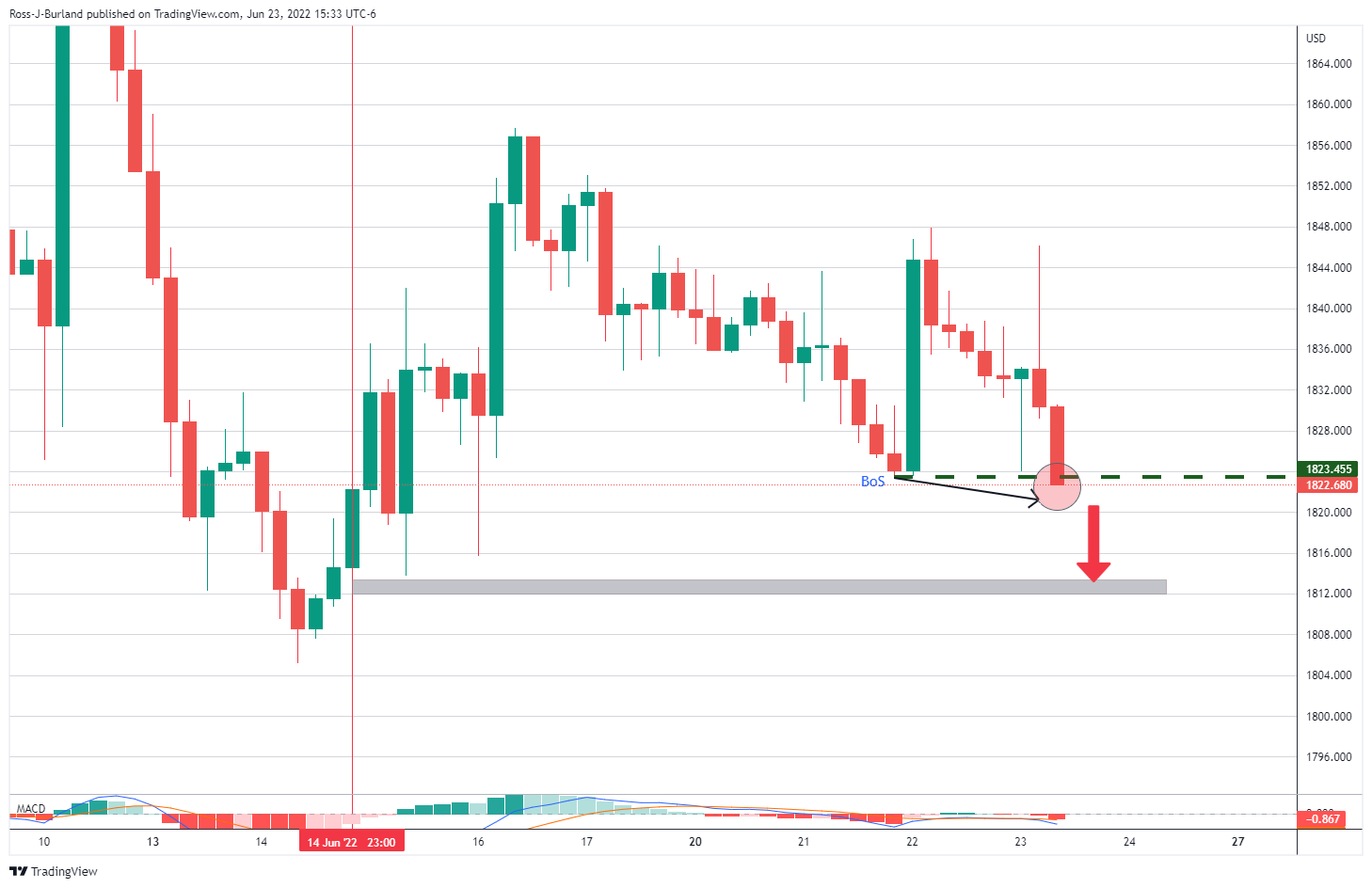 The above analysis of the 4-hour time frame pinpoints the areas of liquidity in the order blocks (OBs), or the expected levels of demand and supply, and the areas where the price is yet to mitigate the price inefficiencies (PI), or ‘price imbalances’ (a miss-match in bids and offers). This leaves the price trapped between $1,810, or thereabout, on the downside and $1,875, or there about on the upside. If the bulls commit within the current ranges, then there will be a case for a move higher towards areas of imbalance above on the way towards $1,875.