Barr, long a critic of the investigation into possible Trump campaign links to 2016 Russian election meddling, has been closely managing Justice Department investigations that are delivering an alternative narrative to that found by Mueller.
One led by St. Louis US Attorney Jeffrey Jensen, a re-examination of the prosecution and guilty plea of former Trump national security adviser Michael Flynn, recently prompted the Justice Department to seek to drop charges in the case despite Flynn’s guilty plea. Flynn was one of Mueller’s highest-profile prosecutions and Barr now says there was no crime and no reason to even investigate Flynn.
Another, led by Connecticut US Attorney John Durham, is taking a broader look at the origins of intelligence that led to the Russia investigation. Among the issues Durham is examining, according to witnesses interviewed, is whether US intelligence properly concluded that the Russian government aimed to help President Donald Trump’s election.
Mueller’s two-year investigation concluded that not only was Russian election interference aimed at helping Trump win, but members of the Trump campaign welcomed and encouraged the help. A bipartisan Senate investigation also supported an earlier US intelligence community report that also concluded the Russians aimed to boost Trump’s election.
Barr, in a recent CBS News interview, rejected any suggestion he was doing the President’s bidding, saying his decision on Flynn was fulfilling a duty to restore faith in the justice system.
For Trump, whose reelection prospects have suffered amid lapses in his government’s response to the coronavirus pandemic, a newly recast narrative to events in 2016 could come just in time.
The President already is highlighting documents produced by Barr’s review of the Flynn case to tie his likely Democratic opponent, Joe Biden, to what he says were unspecified crimes against him and his presidency.
While Trump complained for three years that his presidency was overshadowed by the Russia probe, he appears to have decided that he benefits from talking about the Russia investigation in the months leading to the 2020 election. 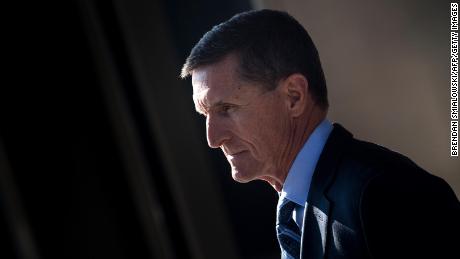 He is also using an “Obamagate” moniker to level charges that Biden was part of an Obama administration plot to target him and his aides. His campaign issued a statement after the Flynn charges saying: “The Obama-Biden officials responsible for these misdeeds must be held accountable.”
Despite the suggestion of impropriety in the handling of the Flynn case, the Justice Department hasn’t accused anyone of wrongdoing. In recent weeks, Barr has appeared on Fox News to talk about progress in Durham’s probe, including raising the possibility of election-year prosecutions, though he quickly added that there are hurdles to bringing charges. Even if no charges come, Barr has said in recent interviews Durham will probably produce a report on what the attorney general says are troubling findings.

In recent months, Barr also has gained an important ally in acting Director of National Intelligence Richard Grenell, who is accelerating the release of documents that the President’s allies say show Obama White House officials plotted a coup against his incoming administration.
On Wednesday, Senate Republicans released a list, declassified by Grenell, of Obama-era officials who sought to “unmask” names of Americans in intelligence reports in the weeks before Trump took office, including in secret surveillance reports that documented Flynn’s conversations with the Russian ambassador at the time.
Documents produced recently by Barr have created a furor in conservative media. In Barr’s Flynn review, these include internal FBI emails and notes showing discussions among investigators as they prepared to look into Flynn’s activities during the Trump transition. Barr cited some of the documents as reason for authorizing the Justice Department to drop charges against Flynn, who had twice pleaded guilty to making false statements to the FBI.
Barr worked with Grenell to declassify portions of the Justice Department’s inspector general report that showed that some at the FBI were concerned that Russian disinformation may have been used in an anti-Trump dossier produced by Christopher Steele. That report, from Justice Department inspector general Michael Horowitz, faulted the FBI for how it handled information from the Steele dossier, which was paid for by the Democratic National Committee.
The release of the Flynn documents dovetailed with the publication of documents from congressional interviews of key witnesses in the Russia investigation. Democrats had voted to release the documents months ago, but said the release was held up in a review by the DNI. Last week, Grenell said the review was complete and threatened to release the documents if Democrats on the House Intelligence Committee didn’t do it. 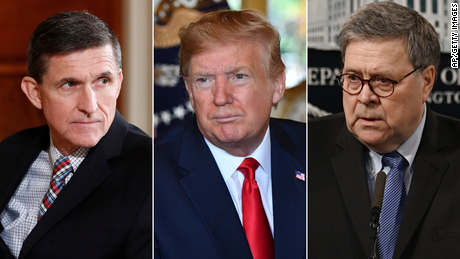 The transcripts release, arriving soon after Barr moved to drop the Flynn charges, have sparked a re-litigation by partisans on both sides of events in 2016 and early 2017, when the investigation into Flynn and others around Trump became public. Among the documents released were interviews of former Deputy Attorney General Sally Yates and other Obama officials who described White House meetings during the Trump transition. The President’s supporters have sought to characterize those meetings as akin to a coup against the then-incoming President.
The political overtones of recent events have unnerved some Justice Department officials, where the lawyers worry privately about long-term damage to the institution. One official told CNN that the department’s work to undermine the Flynn case likely will have repercussions in other criminal cases, where defendants will try to exploit the attorney general’s claim that Flynn’s lie to the FBI didn’t matter because he shouldn’t have been interviewed.
Nearly 2,000 Justice Department alumni signed an open letter criticizing Barr for the Flynn case and other decisions in politically-sensitive cases.
In February, Barr set off turmoil when he publicly chastised and reversed prosecutors who followed Justice Department policy in seeking a prison term for Trump friend Roger Stone. Following Trump’s criticism on Twitter, Barr ordered a more lenient sentencing recommendation.
The move prompted one prosecutor to resign and others to leave the case. The controversy also prompted Barr, for the first time, to express public displeasure with the President’s tweets, though he held firm on his handling of the Stone matter.
Barr has made clear his work isn’t done.
After announcing the Flynn decision, Barr said he had some additional work for Jensen. 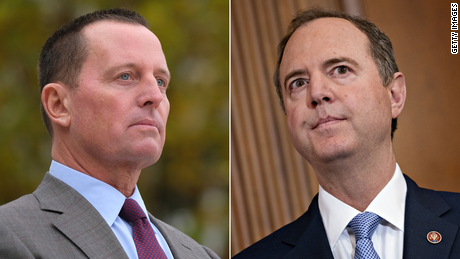 The President and his allies say that more information will be released soon to support Trump’s claims that Obama officials, perhaps even the president and vice president, committed unspecified wrongdoing. It is unclear what form that will take.
The effort has even taken on some television-friendly staging.
Last week, a Fox News camera captured Grenell making an unusual entrance on foot to Justice Department headquarters. Senior government officials and their security details are usually driven into a courtyard, where their arrival would be shielded from cameras.
A US official said Grenell was delivering to Barr the Flynn unmasking documents he had recently declassified. The President took notice.
“I saw Ric yesterday walking in with thousands of pages of paper into the Justice Department,” Trump beamed to a group of Republican allies at the White House recently, exaggerating the size of volume of documents Grenell brought with him. “Ric Grenell did a great job.”
CORRECTION: This story has been updated to correct the spelling of Ric Grenell’s first name.
1
Share FacebookTwitterGoogle+ReddItWhatsAppPinterestEmail
Financial Daily News 15638 posts 0 comments

Amazon Says Warehouse Worker Pay Raises to End After May 30

Trump gives Grenell his Cabinet chair after he steps down

Amazon reportedly planning ‘Biggest Sale in the Sky’ for June 22

Trump gives Grenell his Cabinet chair after he steps down

College Board Scraps Plans for SAT at Home