Developing new, solid-state battery technology for the electric-vehicle industry isn’t easy, but QuantumScape (QS -3.92%) continues to make progress. The company updated investors with its first-quarter results in the last week of April. While it continued to show steady progress, QuantumScape stock extended its April slide throughout May as well. QuantumScape shares lost another 14.4% during the month, according to data from S&P Global Market Intelligence.

QuantumScape is still a $5 billion company, even after losing about 47% in value year to date. With the Nasdaq Composite at bear market levels, it’s not surprising to see a pre-revenue technology company down twice as much this year as the tech-heavy index. Much of its value is based solely on potential and relative progress, and investors aren’t willing to hold the riskiest investments through the down cycle. QuantumScape shares have been falling as a result. But that can provide a more attractive entry point for those who still want to add to the speculative portion of a portfolio. 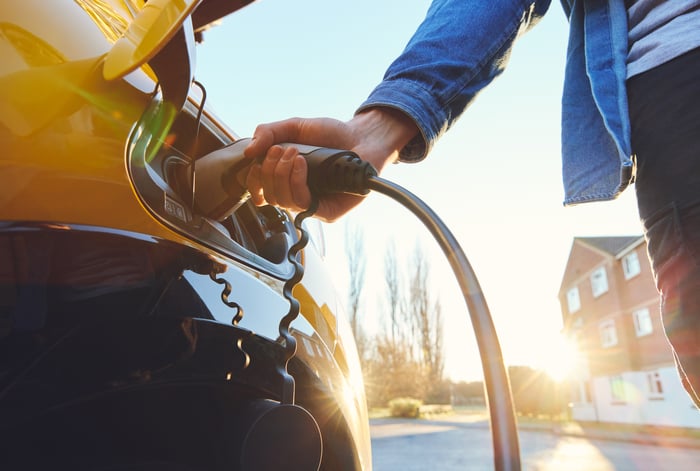 As the market has dropped, business leaders including JPMorgan Chase‘s Jamie Dimon and Tesla‘s Elon Musk have warned of a potentially severe economic downturn or recession to come. If that’s the case, investors are probably thinking that money invested in a speculative stock like QuantumScape will be dead money for some time to come.

That’s particularly true when the timeline for potential commercialization is still at least more than a year away. QuantumScape provided guidance to investors in April, noting it only hopes to begin producing samples on a pre-pilot production line in 2023. The technology still needs to be proven, but the company has been making progress on that front.

It has worked its way up to show it can run multiple cycles on a multilayer battery cell that would be needed for electric vehicle use. The company considers that a successful proof of concept.

QuantumScape also has backing, or interest, from major global automakers that intend to trial its battery technology. In March, it said it signed a new agreement with a top-10 global auto manufacturer by revenue to become its fourth automotive partner.

Should it succeed, the solid-state technology should offer faster charging times with a more efficient and safer battery. It could also provide longer vehicle range with better performance and a longer life cycle than current lithium-ion batteries.

That’s the potential upside in the stock. But until the company hits more milestones that give investors confidence in the success of its technology, as well as the ability to manufacture at scale, the stock may tread water or worse, for an extended period of time.