After the dramatic collapse of its shares in late April, spurred by higher-than-expected losses, Teladoc Health (TDOC 3.17%) is down by more than 66% year to date. And with the pandemic no longer completely blocking people from getting in-person healthcare, it’s reasonable to be worried about the ongoing appeal of telehealth services.

Likewise, Teladoc’s latest earnings update is painting a picture of an increasingly unprofitable business, where growth is always just over the horizon. Is there any hope for shareholders, or are the company’s issues just growing pains? 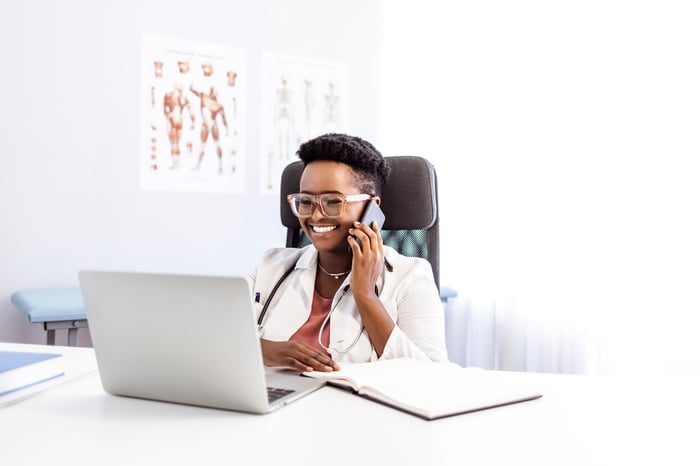 Teladoc offers telehealth services for primary care, mental health, and chronic illness management. To do that, it contracts healthcare providers, who then get reimbursed by the company after it collects regular subscription fees and often access fees from customers.

Upwards of 3.4 million people in the U.S. had digital visits with Teladoc in the first quarter, and its membership base grew to reach 54.3 million, both numbers higher than ever before. If, in aggregate, the fees from these increasing numbers of visits don’t add up to more than the amount it costs to provide telehealth services, growing its user base and utilization rate will end up destroying value.

It’s no big deal for a growth-stage business like Teladoc to burn cash while expanding rapidly. The trouble is investors want to see the rate of those losses diminishing over time with the idea being that, eventually, profitability will come.

In late 2021, management said it was planning on growing its adjusted earnings before interest, taxes, depreciation, and amortization (EBITDA) margin by around 1% annually. But in its Q1 earnings report, it became clear that the plan was off the rails. In the fourth quarter, its adjusted EBITDA margin was 13.9%, whereas its first-quarter margin was a mere 9.6%.

Worse yet, management picked the release of the latest earnings report to walk back its guidance for 2022. Whereas its prior estimates held that Teladoc would have adjusted EBITDA of up to $355 million in fiscal year 2022, the new guidance tops out at $265 million. The CEO attributes the ongoing difficulty, in part, to higher advertising costs and lower-than-anticipated marketing yields, which may or may not improve soon.

In short, the abysmal Q1 results weren’t just a blip — they were a harbinger. And that’s likely why its shares crashed in late April.

Regardless of its difficulties in generating earnings, Teladoc is still a growing company, and it’s very premature to assume its downfall. It still expects to increase its membership base by 1% to 5% this year, and its revenue could rise by as much as 23%, based on management’s estimates. Plus, members are still opting to use its telehealth services at higher rates over time, with the ratio of visits to paid members reaching 23.4% in Q1 compared to only 17.5% in the same period last year. If it can keep squeezing more revenue out of each member per year, as it’s been doing, it’ll go a long way toward making its unit economics work profitably.

It also has nearly $839 million in cash and equivalents. Considering its trailing 12-month operating expenses of more than $1.6 billion and revenue of more than $2.1 billion, that sum could keep the lights on for quite some time. So what does all this mean for Teladoc’s stock price specifically?

The ride could stay bumpy for a while

It’s going to continue being a difficult time to be a Teladoc shareholder for at least the rest of this year. The Federal Reserve’s ongoing efforts to hike the rate at which companies can borrow money has created a market environment that is quite hostile to unprofitable businesses like Teladoc. And the fact that the company’s progress toward higher margins has been recently interrupted and isn’t expected to get back on track anytime soon makes the situation all the worse.

Nonetheless, the business is the leader in telehealth, and people who buy shares of it today could well be sitting on big gains a few years down the line. For the moment, though, it’s probably best to stay away until management proposes a plan for reducing its mounting losses.