The last week was pretty good for US stocks. The tech-heavy Nasdaq rose 6.8% and ended its seven-week losing streak, which was the worst since the dotcom bust. The S&P 500, which is outperforming Nasdaq this year also gained 6.5%.

The Dow Jones also gained 6.2% in the week. Prior to that, the 30-stock index had closed with losses for eight consecutive weeks, the worst performance since 1923. Meanwhile, the S&P 500 has gained over 8% from its recent lows and it is the fifth time in the year that the world’s most popular index has rallied 5% from its lows. Could US stocks continue to rally or even this rally could fizzle away like the previous ones?

2021 was among the best years for US stocks and they delivered high risk-adjusted returns. This year, while volatility has been high, US stocks are still in the red. Tech stocks, especially the high growth names, have been under severe pressure which pushed the Nasdaq into a bear market. The S&P 500 meanwhile managed to dodge one multiple time. The index entered a bear market in 2020 ending the 11-year-long historic bull market.

What’s been ailing US stocks

There are genuine recession fears now after the US economy contracted in the first quarter of 2022. At the same time, the Fed is raising rates and is expected to raise them gradually this year amid high inflation. The global supply chain has worsened which coupled with high inflation is taking a toll on corporate profitability.

Analysts are downgrading US stocks

Amid recession fears, several brokerages have been downgrading US stocks. On Thursday, Citigroup downgraded US stocks and advised investors to move into defensives. “While typically equities only peak shortly before the start of a recession, this time it may happen earlier than we expected, potentially because we have elements of a deflating bubble,” said Citi in its note. The brokerage added, “We therefore cut our US equity allocation back to neutral, but stay long China and UK against Europe.”

Citi is concerned over a recession amid rising interest rates. Commenting on Fed chair Jerome Powell’s comments, it said “At his most optimistic, he talked about a soft’ish’ landing; at his more pessimistic, he spoke about possible pain in the labor market. It did not sound very comforting.” Citi puts a 30% off of a recession and a 10% odd on stagflation. The firm’s economists have put a 50-60% probability of a soft landing for the US economy. 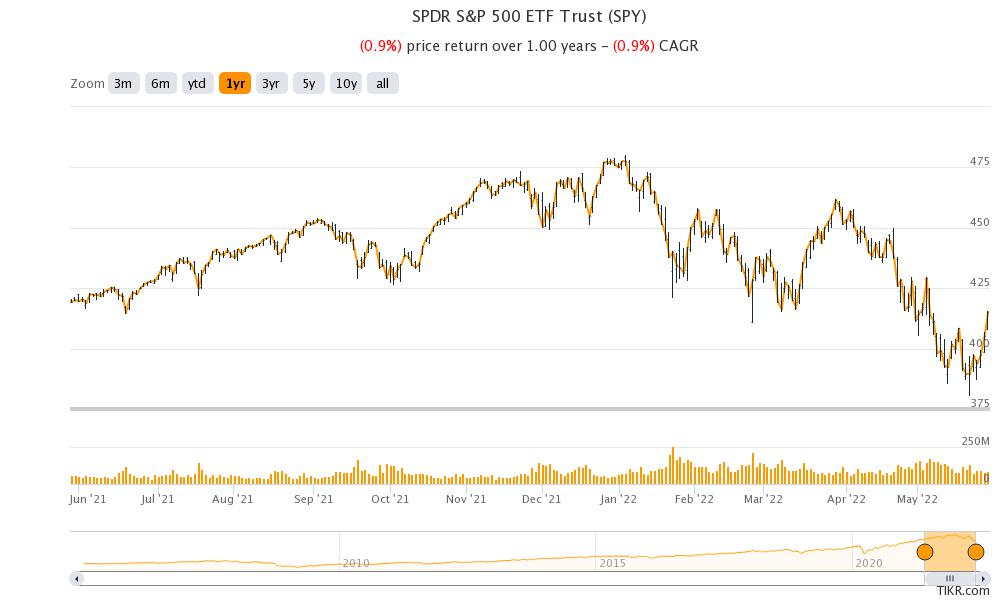 In April, Bank of America lowered S&P 500’s target from 4,700 to 4,600. Deutsche Bank lowered the year-end S&P 500 target from 5,250 to 4,750. It said, “Our baseline view, in line with our current house economics view, is for no recession imminently, with a relief rally recouping the prior peak by year-end, but a protracted selloff late in the cycle risks a slide into a self-fulfilling recession.” It however added that the index could fall to 3,000 if the economy were to enter a recession.

US stocks are not pricing a recession

US stocks don’t seem to price in a recession at the moment. While the valuation multiples have come down, they are still higher than what we usually see in economic downturns. Also, both the Fed and the Federal government would find their hands tied if we indeed head towards a recession. The Fed does not have much room for easing. Not only are rates still quite low but the US central bank has made it amply clear that inflation is its biggest worry. Rising inflation is eating into monthly budgets and retailers have pointed out that sales of consumer discretionary goods are coming down while consumers are downtrading in staples.

Meanwhile, amid all the gloom over US stocks and the economy, Berkshire Hathaway has invested billions in buying stocks in 2022. The Warren Buffett-led conglomerate has scaled up purchases of energy stocks and now two of the top ten holdings are energy companies. It has also bought more Apple shares while adding new positions in several stocks like HP, Ally Financial, Citigroup, Paramount Global, and Activision Blizzard. The company also announced the acquisition of Alleghany which would add to its already massive insurance empire.

The buying spree comes after the conglomerate was a net seller of stocks in the previous five quarters. Buffett instead spent the cash on repurchasing Berkshire shares. Buffett buying stocks at a time when most brokerages are bearish on the near-term outlook for US stocks is a contra indicator.

Meanwhile, the market opinion on the sustainability of the recent rally in US stocks is quite mixed. For an investor, it is always advisable to maintain the asset allocation to equities rather than trying to time the markets.

How to invest in US stocks?

For more information on trading in US stocks, please see our selection of some of the best online stockbrokers. If you wish to trade derivatives, we also have reviewed a list of derivative brokers you can consider.

Also, if you are not well equipped to research stocks or want to avoid the hassle of identifying and investing in stocks, you can pick ETFs that give you diversified exposure to different themes.

By investing in an ETF, one gets returns that are linked to the underlying index after accounting for the fees and other transaction costs. There is also a guide on how to trade in ETFs.