No technology has ever had the potential to transform the way the world does business quite like artificial intelligence (AI). Even in its early stages, it’s already proving its ability to complete complex tasks in a fraction of the time that humans can, with adoption in both large organizations and small-scale start-ups accelerating.

C3.ai (AI 12.60%) is the world’s first enterprise AI provider. It sells ready-made and customized applications to companies that want to leverage the power of this advanced technology without having to build it from scratch, and its customer base continues to grow in both number and pedigree.

C3.ai just reported its full-year results for fiscal 2022 (ended April 30), and beyond its strong financial growth, the company also revealed the magnitude of its future opportunity. 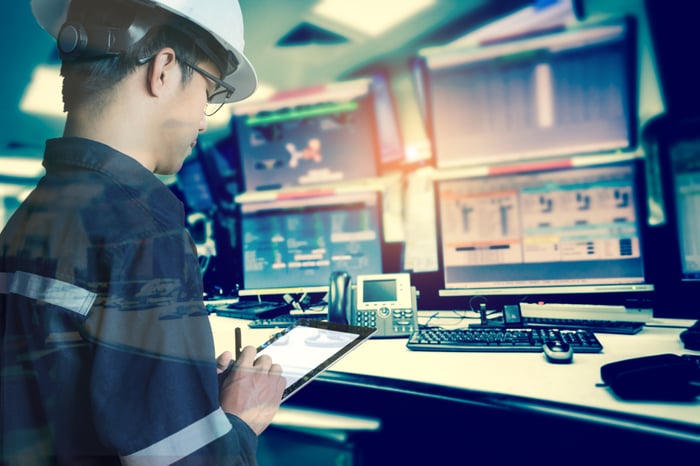 Sentiment among both investors and the general public continues to trend against fossil fuel companies as people become more conscious about humanity’s impact on the environment. Oil and gas companies are constantly trying to improve their processes to produce cleaner energy, and artificial intelligence is now helping them do that.

C3.ai serves companies in 11 industries, but 54% of its revenue comes from the fossil fuel sector. The company has a long-standing partnership with oil and gas services giant Baker Hughes (BKR 2.46%). Together, they’ve developed a full suite of applications designed to enable the industry to predict catastrophic equipment failures and to help reduce carbon emissions. Shell (SHEL 0.71%), for example, uses C3.ai’s software to monitor 10,692 pieces of equipment every single day, ingesting data from over 1.1 million sensors to make 515 million predictions each month.

C3.ai continues to report major customer wins. It just received its first two orders as part of a five-year, $500 million deal with the U.S. Department of Defense, which was signed last quarter. And its collaborations with the world’s largest cloud services providers, like Alphabet‘s Google Cloud, have delivered further blockbuster signings like Tyson Foods and United Parcel Service. C3.ai and Google Cloud are leaning on each other’s expertise to make advanced AI tools more accessible for a growing list of industries.

Overall, by the numbers, C3.ai’s customer count is proof of steady demand. 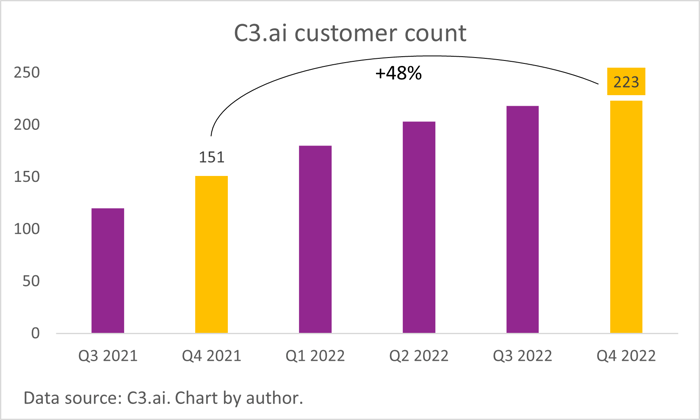 C3.ai reported revenue of $72.3 million in the fourth quarter, which was a 38% year-over-year jump. For the full year, it met its previous guidance and delivered $252.8 million, which was also 38% higher compared to 2021.

But the company’s remaining performance obligations (RPO) will likely capture the attention of investors because they increased by a whopping 62% to $477 million. It’s an important number to track because it’s effectively a looking glass into the future, as C3.ai expects RPO will eventually convert into revenue.

C3.ai isn’t a profitable company just yet. It made a net loss of $192 million for its 2022 full year, a sizable jump from the $55 million it lost in 2021, mainly because it more than doubled its investment in research and development and increased its sales and marketing expenditure by nearly $80 million.

But since the company maintains a gross profit margin of around 75%, it has the flexibility to rein in its operating costs in the future to improve its bottom-line results. C3.ai is deliberately choosing to sacrifice profitability to invest heavily in growth because it’s chasing an addressable market it believes will be worth $596 billion by 2025.

But C3.ai has a very long runway

C3.ai maintains an extremely strong financial position, with over $950 million in cash and equivalents on its balance sheet. That means the company could operate at its 2022 loss rate of $192 million for the next five years before it runs out of cash, leaving plenty of time to add growth before working toward profitability.

Unfortunately, the current market environment has been unfavorable to loss-making technology companies. The Nasdaq 100 tech index currently trades in a bear market, having declined by 25% from its all-time high. It’s representative of dampened sentiment thanks to rising interest rates and geopolitical tensions, which have forced investors to reprice their growth expectations.

C3.ai stock was having difficulties prior to this period, as growth hasn’t been quite as strong as some early backers expected. Overall, the stock price has fallen by 87% since logging its all-time high of $161 per share shortly after its initial public offering in December 2020.

But that might be a great opportunity for investors with a long-term time horizon. C3.ai has some of the world’s largest companies on its customer list, it’s running a healthy gross profit margin, and it’s staring at a $596 billion opportunity in one of the most exciting areas of the technology sector right now.