The Swiss Franc is higher as the fallout from the Swiss National Bank’s (SNB) unexpected 50 basis point (bp) rate hike continues. The Bank of England (BoE) 25 bp hike has also seen Sterling rally as the US Dollar slips.

USD/CHF has put in a double top after hitting the mid-May high of 1.0050 on Wednesday. It has since collapsed below 0.9700 after the SNB’s announcement yesterday.

The SNB has a storied history of unconventional changes to policy. Most famous is the abandoning of capping the rising Franc in 2015 that saw EUR/CHF go from 1.2000 to 0.8600 at a blistering pace. It then recovered back above parity, where it has mostly been ever since.

The BoE was more straight up, delivering on the telegraphed 25 bp rate rise. GBP/USD is only slightly softer through the Asian session.

While the US Dollar is generally under pressure elsewhere, USD/JPY galloped north after the Bank of Japan left monetary policy unchanged. Next Thursday’s inflation data there will be closely watched.

A deeply negative Wall Street cash session has seen futures recover somewhat after hours. Australian and Japanese equities had a down day, but Hong Kong and mainland Chinese markets gained some ground.

Industrial metals are weaker while gold is fairly steady near US$ 1,842 an ounce. Crude oil is a tad weaker with the WTI futures contract below US$ 117 bbl and the Brent contract near US$ 119 bbl.

Looking ahead, after Eurozone CPI, Canada and the US will see industrial production figures.

The full economic calendar can be viewed here.

The move down bounced off a break point at 1.0132 and closed above a previous low of 1.0189 and these levels might provide support.

A double top was put in place last week when the price was unable to break above last month’s peak of 1.0515. 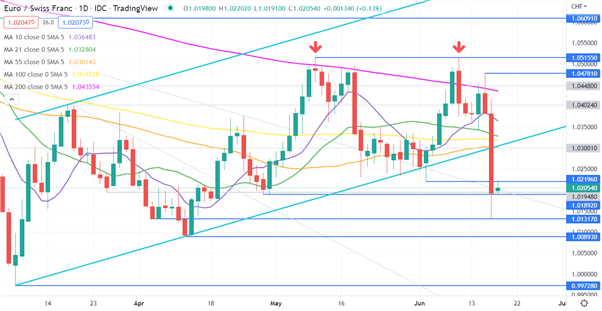