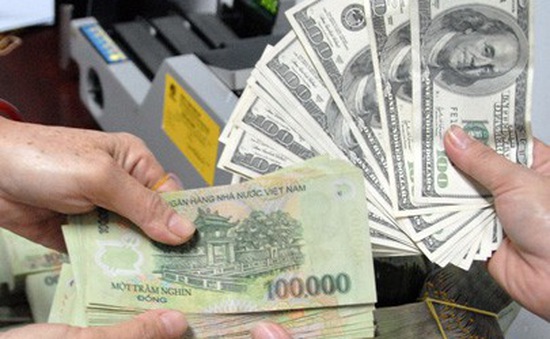 A customer buys US dollars at a bank in Hà Nội. During May and the first half of June, the đồng depreciated about 1.0 per cent on the official market. Photo baochinhphu.vn

HÀ NỘI — The State Bank of Việt Nam (SBV) sold about US$7 billion in the first five months of this year to balance the supply and demand sources of the greenback in the domestic forex market, according to the Viet Dragon Securities Corporation (VDSC).

The USD/VNĐ exchange rate listed at Vietcombank has so far this year increased by approximately 2 per cent.

The average rate of commercial banks according to Bloomberg’s statistics in the period has increased by about 1.7 per cent. During May and the first half of June alone, the đồng depreciated about 1.0 per cent on the official market.

However, in the context that most currencies have fallen significantly against the US dollar after the Federal Reserve raised interest rates, the đồng has remained relatively stable.

The US Dollar Index has so far this year risen by 9.2 per cent, resulting in the depreciation of many currencies. The Japanese yen has fallen by 16.8 per cent, followed by the British pound (11.5 per cent) and euro (8.5 per cent). The Chinese yuan has also dropped by 6.3 per cent, Indian rupee (5 per cent) and Malaysian Ringgit (6 per cent).

According to VDSC’s analysts, the domestic exchange rate might be under higher pressure at some times in the coming months, but the SBV will have enough resources to intervene and rebalance when necessary.

Việt Nam’s foreign exchange reserves are currently measured at more than US$100 billion, equal to 3.1 months of imports, and are forecast to keep rising. The value, which is four times higher than in 2015, will be an important buffer to stabilise the domestic forex market and help the country’s economy withstand external shocks.

Though exchange rate management in the remaining months of the year is still a big challenge for the SBV, VDSC’s analysts believe that the đồng will not depreciate as strongly as other currencies as in the latest meeting this month, the SBV affirmed to continually manage the exchange rate flexibly and readily cope with greater pressure caused by external uncertainties in the near future.

Under the move, the VDSC’s analysts expect the đồng to depreciate only about 2.0-2.5 per cent in 2022, 1 percentage point higher than its forecast at the beginning of this year.

Earlier, Vietcombank Securities Company (VCBS) believed the USD/VNĐ exchange rate will increase by under 2 per cent in 2022.

The State Bank of Vietnam set the daily reference exchange rate for the US dollar at VNĐ23,087 per dollar on Tuesday, down VNĐ5 from the previous day.

With the current trading band of +/-3 per cent, the ceiling rate applicable to commercial banks during the day is VNĐ23,779 per dollar and the floor rate VNĐ22,394 per dollar.

The rates at some commercial banks also dropped.