Despite the strength of the US labor market numbers, the price of the EUR/USD currency pair is trying to stabilize above the resistance 1.0700. In an attempt to maintain the formation of an ascending channel that was formed recently there were quick signals from the European Central Bank about the future and date of raising European interest rates. The European Central Bank has recently primed markets for a pending rise in interest rates, and chief economist Philip Lane recently suggested that it could now look to “validate” market expectations with actions, although this could have a mixed blessing on the exchange rate.

Central bankers in Europe have been engulfed in an ongoing debate within the Governing Council over whether to raise the negative deposit rate in a typical increase of 0.25% or on a larger scale of 0.50% after the expected end of the ECB’s remaining quantitative easing program days later.

This is the background against which the next round of forecasts will be revealed, and the context in which they are likely to be evaluated by the markets.

“It is strong that the initial steps in normalization have been taken to validate the tightening that has already occurred in many financial markets,” ECB chief economist Philip Lane reportedly told the Center for Economic Policy Research (CEPR) in Paris. But this observation is ambiguous in terms of its implications for the potential size of the expected July increase in key ECB interest rates and partly because of the underlying uncertainty in financial markets about the exact size that such a move might be.

Financial markets have so far shifted to a 0.35% increase in the deposit rate, which is the rate that commercial banks charge to deposit funds with the European Central Bank, in July of this year, and there is a risk that expectations will rise after next Thursday’s policy decision. “The ECB is priced at 180 basis points in rate increases through the end of 2023, just like the Fed, yet it’s hard to see the ECB moving,” says Richard Vranulovic, Sydney-based FX analyst at Westpac. from the soles of the feet.”

“The European Central Bank is sure to disappoint expectations, as the region faces more material hardships as sanctions on Russian energy supplies continue to gradually tighten,” the analyst added.

The publicly broadcast ECB policy talk has helped lift the euro from nearly five-year lows in recent weeks and has also sent European yields up sharply. But for the euro, it is possible, if not likely, that market expectations will soon reach levels that the ECB will find difficult to achieve, perhaps as soon as next Thursday’s decision, depending on how financial markets interpret the new forecast.

Jeremy Stretch, forex analyst at CIBC Capital Markets says: The risk to EUR/USD may be that by the time of the eagerly anticipated interest rate decision in July, expectations may be high enough to leave the ECB in a position to be disappointed. However, market disappointment with the eventual delivery of the European Central Bank’s monetary policy measures is not the only risk facing the Euro. Other factors include oil prices and their tendency to rise whenever and wherever the euro rises or the dollar falls, which raises manufacturing costs for companies and can significantly raise inflation worldwide.

According to the technical analysis of the pair: On the daily chart, the price of the EUR/USD currency pair is still at the beginning of breaking the bearish trend, and it still needs more momentum to strengthen the opposite channel that was formed recently. As I mentioned before, the EUR/USD price will need to move towards the resistance levels 1.0795 and 1.1000 to confirm the bullish reversal. On the other hand, bullish expectations may be negatively affected by the euro-dollar’s move towards the support levels of 1.0640 and 1.0555, respectively.

I expect the euro-dollar movements to calm down until the European Central Bank’s policy decisions are announced next Thursday. 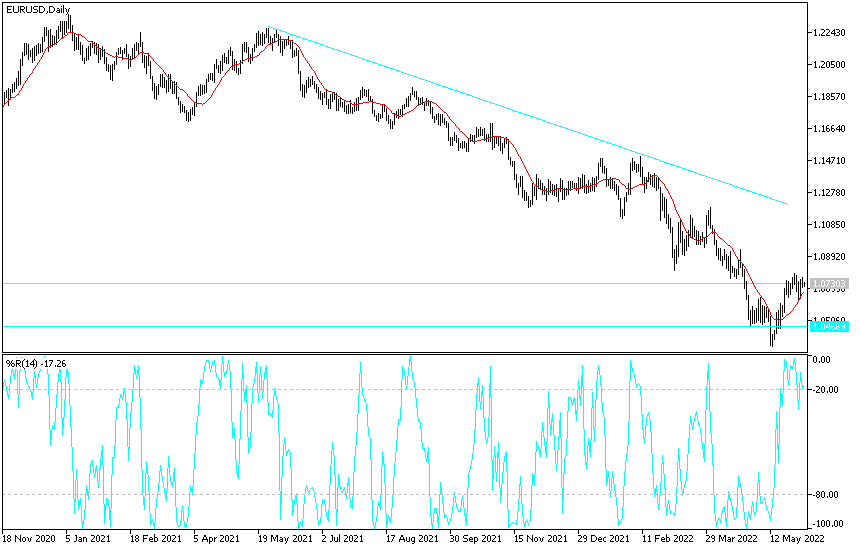